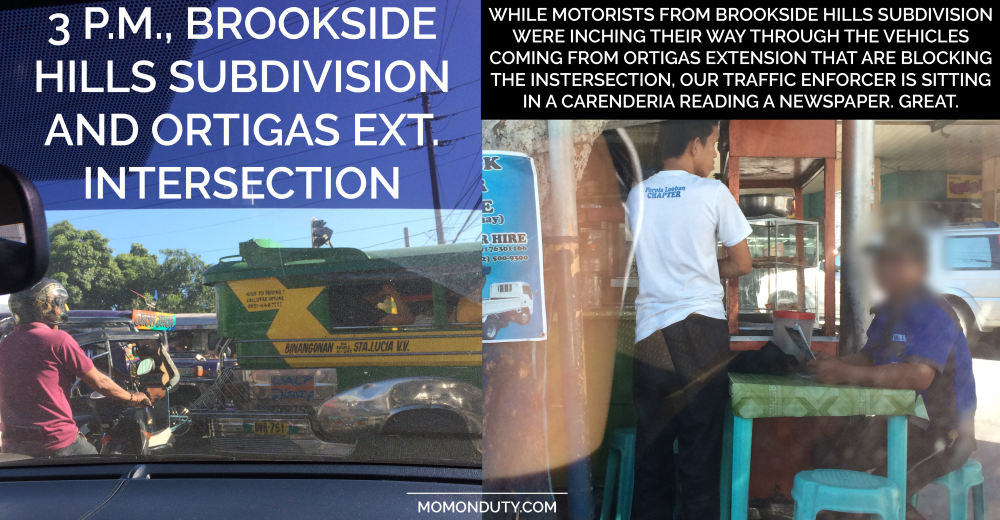 Anywhere you look in social media, whichever gathering you attend, someone will almost always bring up the crazy traffic situation the Philippines is facing now. I never really complained about it before because I don’t live or work in Metro Manila where the the so-called Carmageddon is a daily occurrence. But now that we’ve moved to the busier part of the Suburban East, I’m surprised that we’re starting to feel the traffic craze in Rizal too.

I couldn’t help but laugh in disbelief when, on our way to my mom’s house, we encountered this ridiculous situation along Ortigas Avenue Extension. I mean, I see the traffic there every day on my way to my office (which is, thankfully, just a quick walk from our condo), but it was crazy seeing how drivers behave on the road nowadays from the driver’s seat. Now I know why road rage occurs. Thankfully, the minis were asleep during our drive. Otherwise, I would have turned into momzilla.

“Wala bang enforcer?” I wondered. As I looked around, I saw an enforcer sitting in a corner carenderia reading the newspaper while a horrendous traffic situation unfolds. I had to look twice to make sure he is, indeed, a traffic enforcer…and he is. I’m quite familiar with the blue uniform of our enforcers labeled One Cainta since I see them directing traffic in the town center. I was in disbelief.

It’s disappointing that our traffic enforcer was sitting around while the traffic situation worsens. But I think what’s more disappointing is everyone else’s lack of discipline. I mean, in the first place, I don’t think we need traffic enforcers around to tell us when to stop and when to move. Shouldn’t it be common sense to stop when the red light is on or to stop, even if the traffic light is green, when the traffic on the other side of the intersection is not moving? Naturally, if you move when you’re not supposed to or move when there’s nowhere to really move to, then you will block the way of all other vehicles.

It’s funny how everyone complains about the traffic situation, but the truth is, it’s not just the government’s fault (get road constructions done on time please) but everyone’s (simply because we lack discipline). If we can just be more patient; if we can just follow the very simple traffic rules and add a bit of common sense to our driving habits, then maybe we wouldn’t be in this situation.

So yes. We brought the Carmageddon upon ourselves. Let’s all make it a little less bad by being courteous drivers.

Dirty Words: What To Do When Your Child Says A Bad Word