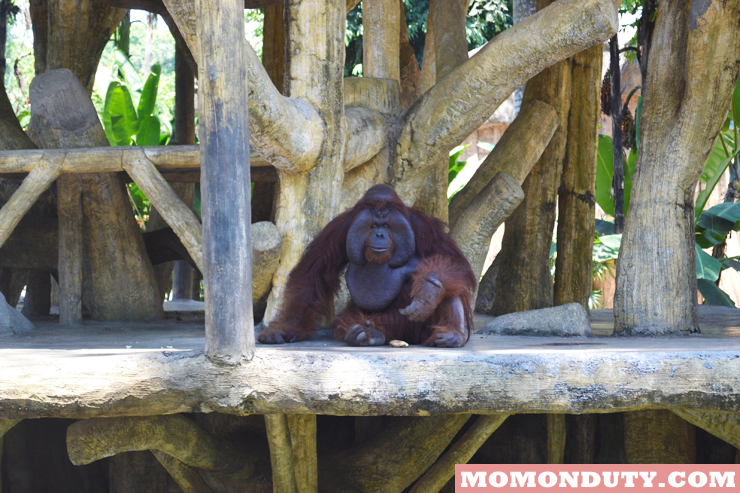 Can you believe it? Our little princess is already four!!! Kids grow up fast, don’t they? Since her birthday fell on a weekday, we drove to a famous family destination in Daddy A’s AOR and just scheduled her party the following weekend.

So where did we go? No other than Avilon Zoo in Rodriguez, Rizal! Although it is quite near our place, we have never been to this zoo. We wanted to wait until the minis are older before we headed here. So now that we have a preschooler and a toddler, we agreed to take them here for the Princess’ birthday.

A Friendly Reminder: Avilon Zoo is 7.5 hectares big. It took us about three hours, with one mini-break, to finish the whole tour. Although there are trees all over the zoo, expect to take a loooong walk under the sun. Remember to bring an umbrella/cap, lots of water and a change of clothes. They have ramps for those in wheels. I suggest that you bring a stroller with you if you don’t want to end up carrying your little one throughout the tour.

As soon as we entered the zoo, we were already greeted by all sorts of birds. Those may be just ducks, but it was the first time the minis got that close to ducks so they were quite fascinated. We then headed to where the reptiles are housed. They have all sorts of snakes, lizards and turtles. I am dead scared of snakes and lizards so I didn’t take photos of them (haha), but I did take a shot of a turtle that The Princess named Turtle Tom’s Mom. This one looks a lot like their class pet, Turtle Tom, but much bigger…hence the name she gave it. I forgot what species this is, though. There are many others in the zoo, like the 60-year old Tortoise, and the huge snapping turtle that our guide said can severe an arm! I didn’t bother to go closer to take a photo anymore.

Our guide also took us on a tour around the hall featuring live arachnids. Although the boys found it interesting to look at each spider and scorpion, the Princess and I breezed by the hall like the wind. Spiders? No thank you.

Thankfully, that was the end of all the scary animals (for the Princess and I, haha). We moved on to the aviary where beautiful and colorful birds are showcased. Our favorite will have to be the talkative Macaw.

We took a break after our walk around the aviary since we all got too hot. It’s good that Avilon Zoo has a snack station in the middle of the zoo so we wouldn’t have to walk all over to the front to buy snacks and drinks. Who’d want to walk all the way back in the heat, right? You probably wouldn’t even make it to the front entrance. LOL!

After our water break, our guide took us to where all the mammals are. This is the part the minis have been waiting for since we started the tour so they were thrilled to know that the mammals are up next. First up are the monkeys and lemurs. Joey, the super cute Orangutan, greeted our arrival. I say super cute because he acted shy (covering his face with his palms) when the minis said hi. He did come closer when he saw one of the trainers holding a banana. He then opened his palm, as if asking for one.

I’m so glad Joey stayed put when I took this picture! He kept hiding his face every time I tried to take a shot. According to our guide, Orangutans’ brains can be developed as far as how a human 4-year old child thinks. That’s why he seems to be acting like a child. In fact, he acts just like the Princess–hiding/whining when I ask if I can take a photo! So don’t wonder why we don’t have a lot of photos of the kids in this post. We also got to meet Trixie, another Orangutan, up-close in their petting area. I wanted to take a picture with her, but the minis were scared to sit beside the friendly Orangutan. It’s funny that she kept smiling at us and asking us to sit beside her.

There are other types of monkeys and lemurs as we entered a cave-like hall, but I decided not to take photos so as not to stun them. Our guide said that they lost some of their animals because they’d commit suicide after getting stressed by a camera flash. So friends, if there’s a sign that says ‘Turn Off Flash’ or ‘No Picture Taking,’ please follow!

After seeing the monkeys and lemurs, our guide took us to a high platform. To the minis’ joy, we were overlooking two giraffes! I have never seen a giraffe up close as well so I got pretty excited that we are actually going to feed them. A stick of carrot will cost you PhP50, but I tell you, your kid will enjoy the experience! The minis also got to feed the donkeys and met some familiar animals like this boar with a mohawk: The minis named this one Daddy Pig. There are two smaller boars rolling in a puddle, which they named Peppa and George. We stayed there for quite a while because they truly had fun watching ‘Peppa’ and ‘George’ jump in the muddy puddle.

And here’s Winnie the Pooh asking us for a jar of honey: The Princess’ birthday at Avilon Zoo was a blast! I have to say that this is one of the most well-maintained zoos we’ve seen in the Philippines. I highly recommend this to families with children as young as one year old. I don’t think it would be good to bring an infant here because of the heat.

Commuting to Avilon Zoo? Take a either Jeep/FX with the sign Montalban from Cubao Aurora/Farmers. This will pass through Marikina City and San Mateo Rizal. Request the jeepney/FX driver to drop you off at Total Gas Station in Rodriguez, Rizal. Ride an orange tricycle going to Avilon Zoo from there.

Be united for healthier kids in the Philippines!

COCOLINE Naturals: Blending Nature and Skin Care In One Bottle