Last Sunday, we had a joint celebration of The Princess’ 2nd birthday and The Little Man’s Christening. We had the whole party planned since February: we already chose a theme, we discussed the decorations, we had the invitations designed and printed out, etc.

By April, I already e-mailed the caterer for their menu and prices. We hired the services of Blossoms Delight Food Services when The Princess was baptized and we were pretty happy with the turn out of the party so we re-hired them. They sent us their birthday packages and photos of their previous events. The set ups they showed looked pretty good to us plus the packages were affordable so we were sold.

The package we chose includes:

It was also written that they will provide:

Two weeks before the party, I met up with Lenny, the owner of Blossoms Delight Food Services, to give her our first payment and to discuss the party with her. I told her that our theme is going to be Rio (the cartoon movie) and that I want a cake that matches the theme. She said I will have to add P800 for the cake and cupcakes, which I agreed to, because that’s pretty cheap for a two-layer fondant cake.

A week before the party, I gave our second payment. We discussed the plans again to make sure that everything will turn out smoothly. I told her that I want the venue to be set up by 10 since the Christening will start at 11 and guests will be at the lunch venue by 12.

We were at the Church for The Little Man’s Baptism by 10:30 in the morning. It was around that time that the owner of the catering service we hired called us. She told us that the tables and chairs haven’t been delivered, but the truck is just a few minutes away and that the setup will only take 20 minutes so there’s nothing to worry about.

The Baptism lasted for about an hour. We then proceeded to the lunch venue after taking a few photos with our godparents at the Church. While on our way, my cousin called and informed me that the tables and chairs are still not there!

I panicked and called the owner of Blossoms Delight Food Services. My first few calls were ignored up until we reached the venue. We went to the pent house and an embarrassing sight greeted Daddy A and I. Some guests were standing outside, others were seated on chairs provided by the venue. Where are the tables and chairs promised by the caterer? I had no idea.

I called her again. I was ignored for a few minutes until she answered my call. She told me that the venue’s guard did not allow them to take the tables and chairs up because they had no gate pass. I talked to the building manager, who was our guest, and he told me that there is no such thing as a ‘gate pass’ — especially that he personally knows us.

I called her again, but she insisted that it’s the venue’s fault.

Thirty embarrassing minutes passed. Still no chairs and tables. That’s when the building manager called their maintenance team and asked for their office tables and chairs just so our guests can sit and eat. And because the caterer only sent two waiters and one very grumpy food server, our guests had to set up the tables and chairs themselves!!! Thank goodness we have super understanding guests.

It was already two in the afternoon when the chairs and tables arrived. Thing is, they were no longer needed because we already found a solution to a problem that Blossoms Delight Food Services should have fixed hours ago.

More than the tables and chairs, we paid P27,500 for 100 adults and 50 kids. We only had 50 adult guests and around 15 kids and yet the food was not enough. And where are the food carts? We only got a table with candies and the supposed ice scramble cart was nowhere to be found. Instead, they served the ice scramble in small plastic cups on trays.

We also agreed to an additional P800 for a fondant cake for The Princess, but no cake arrived so we settled for a small, square cake from Goldilocks. Many thanks to my kids’ Ninong and Ninang for buying extra decorations for the cake so it wouldn’t look plain. 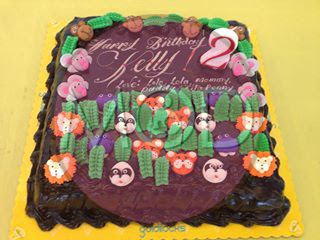 We demanded the owner to go to the venue to talk to us personally. She did arrive, but was gone by the time we were ready to talk. We called her — a million times — but did not receive a reply; not even a text message. An hour later, she finally answered our call and told us that she can’t go back because she got stressed and is no longer feeling well. Imagine how angry Daddy A and I were!!! So what if she wasn’t feeling well? What about us? What about our guests?

After a long argument, she still did not go to the venue. She insisted that she will just meet us the next week… when she’s feeling better. How unprofessional is that, Blossoms Delight Food Services?! One thing is for sure, I will never ever hire your services! And I urge my readers to think twice if you plan to get them for your party.

On a more positive note, although the caterer was an epic fail, Daddy A and I were very happy to see that our kids enjoyed their joint celebration. The guests were wonderful. I didn’t hear a single rant. The kids didn’t mind the crappy decorations — what mattered was there were balloons… that they popped one by one. 😀 So, thank you all for attending and making my kids’ party fun!

Because she said she is not feeling well last May 19, we agreed to meet with her today instead. I sent a text message to both her numbers, but received no reply. So I called her two mobile numbers. Both cannot be reached. I tried their landline. The phone only kept ringing.

It seems that she is avoiding confrontation. We have a contract with her and yet she is treating us this way. Walang professionalism, walang konsensiya. Beware of Blossoms Delight Food Services! The owner is Elena Cellano Barrera, aka Lennie Bernardo.

A Flower In Bloom