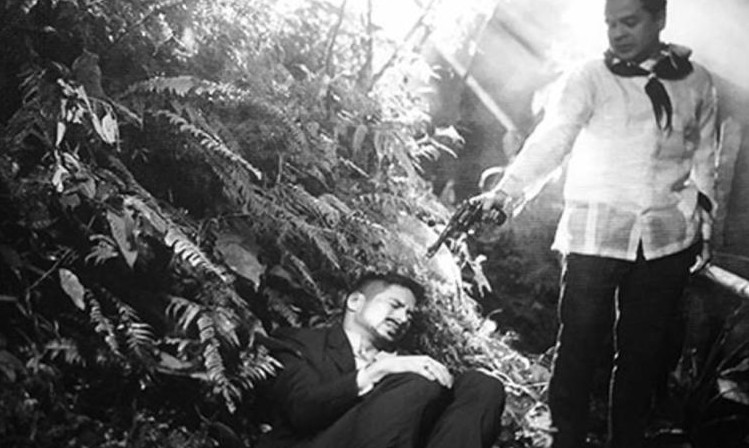 Hele Sa Hiwagang Hapis (A Lullaby to the Sorrowful Mystery) is a fantasy drama written and directed by renowned director, Lav Diaz. It blends the history of the Philippines, the fictional characters in Dr. Jose Rizal’s works of art, and enchanted creatures found in Filipino folklore into one masterpiece that not only tackles the obstacles of the Filipino people during their struggle for freedom from Spain, but also that of the struggles of the Filipino people in finding what Filipino Freedom is today. It was 10:30 am on Easter Sunday when Arjay and I decided to drive to SM Megamall to catch the 12:00 showing of Hele Sa Hiwagang Hapis. It was around 11:45 when we arrived so I hurried up to the cinemas to buy tickets. There was a long line. Although I knew it will take some time to reach the cashier, I still fell in line. A man approached each person to check which film they are going to see; when he reached me, he directed me to a small corner. “D’on kayo ma’am. D’on bilihan ng tickets ng Hele,” he said. I went to the small booth with no line and bought two tickets to Hele Sa Hiwagang Hapis. Arjay was still looking for a parking slot so I called and told him I’ll go inside to find us seats already. “Wala nang tao dito sa labas, baka nasa loob na silang lahat,” I told him. I was expecting there would be a lot of people watching Lav Diaz’s epic film. To my surprise, there was barely anyone inside the cinema.

The whole cinema was quiet when the film started. You can hear a pin drop at the quietness of the place. We were all taking it all in. At the third hour, I could hear some of our fellow moviegoers getting uneasy. I must admit, at some point, it felt a bit dragging. “What’s the point of this film?” I thought to myself. Still, I kept watching, trying to understand what it was telling us.

When the film ended, we were all quiet for a few seconds as we all tried to catch up with the build up that happened towards the end…then we clapped, full of amazement. What a beautiful depiction of the Filipino people and our history! But the depiction of our people and our story is just the icing on top of the cake. More than that, the film went deep into why our country is in such a situation. It also provoked feelings of wanting to do something to change; to stop asking why and start doing.

Behind me, women in their late teens or early 20s were talking to themselves, complaining at how slow the film went. “Paano hindi magiging 8 hours yan eh isang scene more than three minutes tapos walang ginagawa?” one said. I refused the urge to throw my empty bucket of popcorn at them. Obviously, they did not even attempt to understand the film or, as Arjay said, perhaps they are not familiar with the history of the Philippines nor the two works of art of Dr. Jose Rizal: Noli Me Tangere and El Filibusterismo.

Then I realized–those young ladies are the Filipino people. We complain a lot, we say a lot as if we know everything, but do we actually do anything? We are so lazy that we forget to think, to assess, to understand.

There are so many things I want to say about the film, so many realizations I want to share, but I would spoil it for my readers if I wrote these down. So, I urge you to take the 8-hour challenge and watch Hele Sa Hiwagang Hapis (even before you watch Batman vs Superman)–just make sure you prepare your mind AND body!

7 Ways To Help Your Child Get Over A Cold