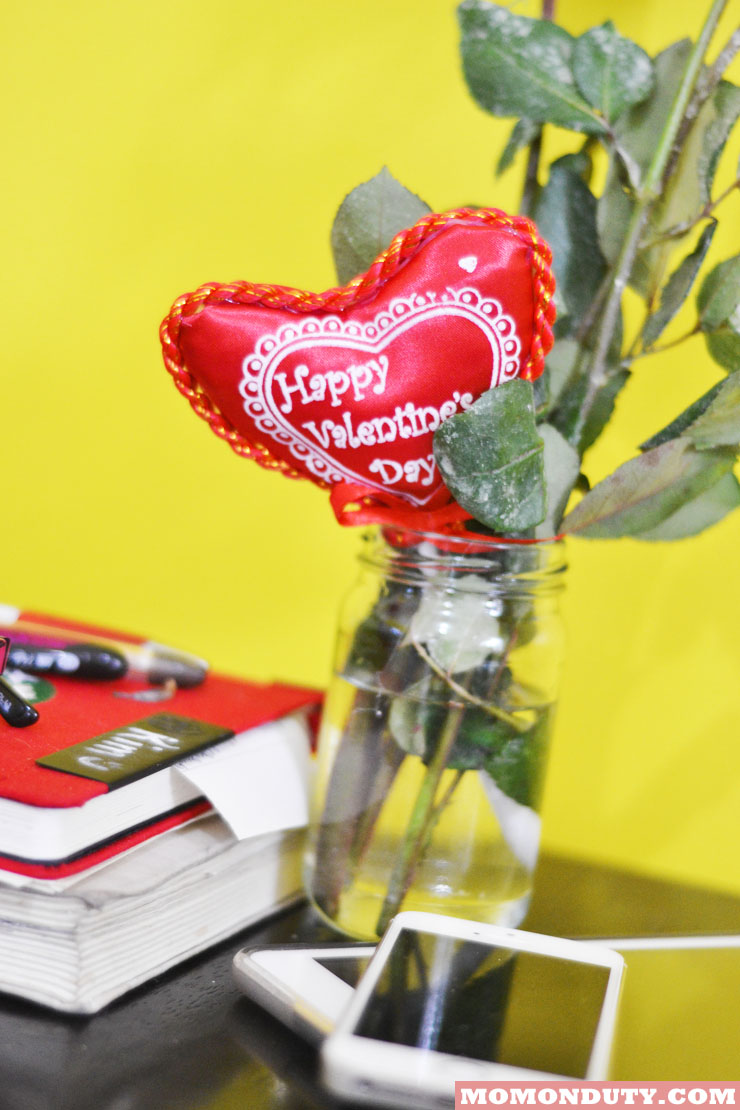 How did you spend Valentine’s Day 2015? We usually eat out on Valentine’s day, but I didn’t expect a celebration this year because Arjay had work scheduled on V-day itself. I also had a pile of work waiting to be finished. He actually asked me to go to work with him, but since ‘work’ meant walking under the sun at noon, I decided to just stay home with the minis.

I didn’t expect gifts either. Arjay’s not the type who gives flowers or chocolates on special occasions. I don’t mind because I’m not the type that asks for such things. I prefer his paintings, a good home-cooked meal with him, or simply paying off our bills. Hehe! Yep, my usual requests for special days are for him to pay all our bills or buy stuff for the home. Last Christmas, my request was for him to pay the downpayment of our lot in full so we can have our house designed already. On Valentine’s Day, I asked for a washing machine (YIPEE!). 😀

Like I said, I didn’t expect him to bring home flowers or chocolates on V-day. But he did. And the presents came with a funny story. In his most paawa voice, Arjay answered: “Kakatapos lang kasi ng duty ko… Ngayon lang ako nakalabas para bumili…” Of course, he could have bought chocolates yesterday. We actually went to the mall the day before. But since he’s such a procrastinator, he bought gifts ON V-day itself. Haha!

Because he’s so kaawa-awa (and believable because he was still wearing his operation uniform), the salesman brought out the last box of Ferrero that he was saving–either for himself or for a special customer (LOL)–and gave it to Arjay. Mission accomplished. So the hubby went home with three red roses, a box of Ferrero, and a bonus Mason Jar that I have been collecting.

As soon as he was home, he asked us to get dressed so we can head to the mall to buy ingredients for our special Valentine’s dinner. I tell you, going out on Valentine’s Day is crazy! Can somebody explain why drivers are so mean on a day when love should be in the air? There was this red Pajero behind us who kept honking his horn while we were letting pedestrians cross the street. Maybe he was late for a date? Then there was this silver Adventure that almost hit us as we were entering the parking lot of Robinson’s Place Antipolo. As in ha, he didn’t even mind pressing on the brake to slow down. Perhaps his date ditched him. Whatever their reasons are, I hope they don’t use those again to drive recklessly. Remember people, you are not only endangering yourself when you drive recklessly, but also others.

Anyway. Our plan was to cook steamed crabs and garlic-butter shrimps for dinner. But with the terrible traffic, we thought of just eating out. We dropped by at Red Palace (right across SM Taytay) but not a single waiter welcomed our arrival. So we went to the counter and asked if they have available tables. The cashier said they don’t have any when actually a group already asked for their bill. Tsk, tsk, tsk.

It was Valentine’s Day so instead of stressing out about poor customer service, we just went to the public market and bought crabs and shrimps. We then headed to my mom’s house, cooked our yummy meal, and had a scrumptious dinner feast.

Where are the photos of our meal, you ask? I don’t have any. We were so hungry we didn’t even bother to take photos. Haha! But I swear, Arjay cooks THE BEST crabs and shrimps. I might not go back to Dampa Sa Libis for my seafood cravings anymore since I have THE BEST cook at home.

Thanks for the special and fun Valentine’s Day, Daddy A!

How did you spend the day of hearts?

What is a Virtual Assistant?