The Little Man’s 4th month was a tough one for Daddy A and I. That was the time when he was just learning to turn on his belly. Unlike his older sister, though, he had a hard time turning his body around. This frustrated him. A lot. He’d scream and cry to the top of his lungs until he runs out of air and, shockingly, turns blue. He has never passed out because we immediately try to get him out of the spell, but some children actually pass out during these spells. 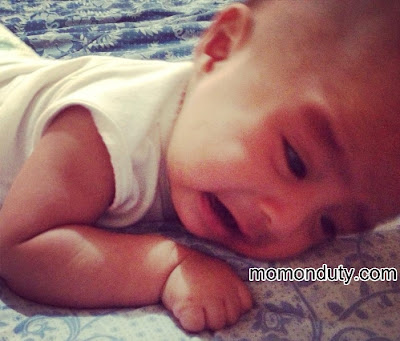 According to Wikipedia, “Breath-holding spells are the occurrence of episodic apnea in children, possibly associated with loss of consciousness, and changes in postural tone.” There are two types of breath-holding spells: Cyanotic and Pallid.

The first type of spell is triggered by frustration, anger or pain. Parents who have witnessed cyanotic spells before can already tell when another one is about the come because the child’s face slowly turns into a blue-ish/purple-ish color.

The second type of spell, however, is not very common and is unpredictable. It is triggered when the child is frightened or startled. You’d know that the child is having a pallid breath-holding spell when he/she becomes very pale (sometimes, almost white).

Most children who hold their breath when crying pass out up to a minute. In severe cases, seizures occur. Imagine the horror that parents go through!

What should you do during a breath-holding spell?

Do your kids have breath-holding spells? Share your tips on handling these spells!

COCOLINE Naturals: Blending Nature and Skin Care In One Bottle