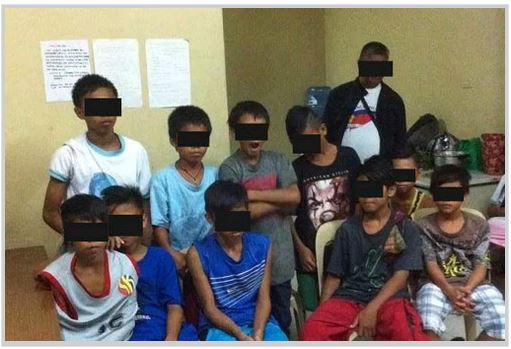 A few years ago, a relative’s shop was robbed by a 17-year old. He was caught, but when they brought him to the police, he mocked our relative by saying that they can’t file a case against him because he’s under 18. This 17-year old, FYI, has nine robbery records already. But still, he hasn’t been charged of any crime.

I haven’t studied the Juvenile Law in detail, but I think it needs to be re-checked. Or, if we could actually file a case, the police needs to stop discouraging us not to file a case because the kid is a minor. Call me heartless, but if I were in our relative’s shoes, I would have filed a case. But he didn’t. Sayang.

I was reminded about this incident from a few years back because just yesterday, as we were heading home from our appointment at PAGIBIG, a street child assaulted us. We were stopped in the stop light where Meralco Avenue and Ortigas Avenue intersects. A child, around 13 or 14 years of age, started knocking on our door asking for coins. Since we don’t make it a habit to give coins to beggars and we didn’t have food in the car, we waved our hand to signal that we have nothing to give.

The child started banging on the driver’s seat window harder and harder. When we didn’t give in, I thought he’d walk away already but instead, he tried to force open the back door where my two toddlers were seated. Imagine my horror! Thankfully, the doors were locked and he didn’t try to break the window. And thankfully, the signal turned green so we were able to drive off already.

I wasn’t able to take a photo of the child because I was too scared to open the windows or even stay there even for just a few more seconds. The boy looks stoned. And, we all know that there is a modus going on that if you go down your car, someone can come in and get your car…together with everything and everyone inside. I couldn’t risk the safety of my children.

When these things happen, what do you do? I wanted to go to the nearest police station and report the case, but I had no idea where it is located. I didn’t see a uniformed personnel around as well so I had no one to report the incident to that very moment. If there was someone there, the child would have been brought to custody. Or, it would not have happened at all.

I cannot believe I child would do such a violent act. I know the Juvenile Law was passed to protect the children of the Philippines. But, are these kids really victims of their situation? I’ve heard and read hundreds of stories of children who have nothing, but still persevered against all odds and were able to lift themselves up from the rut they are in. Even without parents. I met some of these children during our encounters back when I was in Ateneo. I’ve seen their stories in MMK, too. Heck, my own husband came from a poor family who did everything they can to get out of their situation–even if it meant entering the academy despite wanting to study Architecture. So I don’t think they are victims at all. They have a choice–to stay in the streets, committing crimes, or strive to live a better life.

I think it’s time for something to be done about these incidents with children. I know they are children, but they need to be taught a lesson as well.

The Girl He Wants To Marry