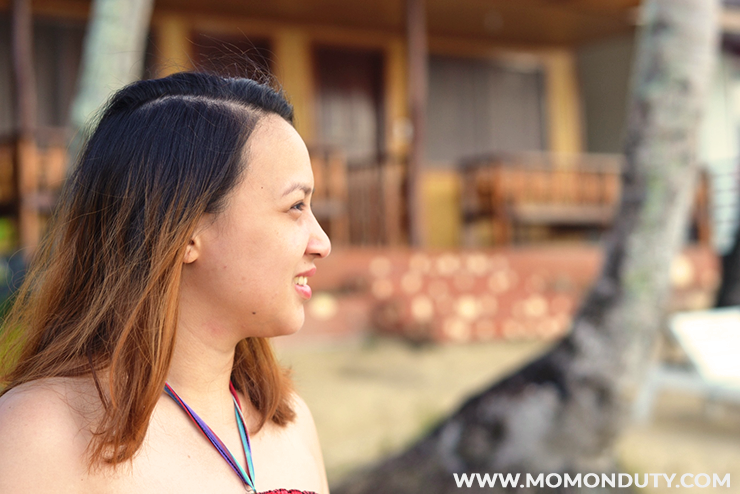 I’ve been meaning to write about my birthday vacation, which happened almost a month ago. But since I’ve been extremely busy ever since I returned from that vacation, I never had the chance to blog about it. Now that I have some time on my hands, let me share with you our paradise-like vacation in El Nido Palawan…

After my birthday dinner with my family on the 30th of July at Vikings SM Markina, Arjay and I packed our things and prepared for the vacation we booked just a few days before. We never really planned to take a vacation for my birthday, but since we both knew we needed a break, we said, “What the hell!” and bought tickets to Puerto Princesa Palawan.

We had no idea what our itinerary will be like, nor did we have accommodation booked. We just drove to the airport and flew to Puerto Princesa. Thankfully, one of Arjay’s friends from his Officers’ Basic Course lives in Puerto Princesa. He greeted us on our arrival and offered to drive us all the way to El Nido. He even went out of the way to find a hotel for us there.

I say he went out of the way because El Nido is a 5-hour drive from Puerto Princesa! If he didn’t bring us there, we would have endured a long, cramped ride in a passenger van and not truly enjoy the sights on the way. But since he brought his own car, he was able to take us on side trips on the way to El Nido. One of which is the old town of Taytay, Palawan. After our long journey from Puerto Princesa to El Nido, we finally reached our destination. Although the town was buzzing with locals and tourists alike, July isn’t the peak season in El Nido so it wasn’t hard to find a hotel to stay in. We looked at three hotels, but what we found the most comfortable at an affordable price (and near the beach) is Rovic’s Tourist Hotel. It’s not beach front, but it’s just a few steps away from the beach. Note that there are two Rovic’s there: the Rovic’s Tourist Hotel where we stayed, and the Rovic’s Pension House. Go for the first one.

We chose the Matrimonial Deluxe Room for our stay because hello, we never had a honeymoon kaya. LOL! Kidding aside, we found that the Deluxe Room is a bit too cramped for us so we got the next bigger room.

What I Love About Rovic’s Tourist Hotel:

We spent the first night in a dinner by the beach. They say seafood is the best here so that’s what we got: crabs, shrimps, and fish. We also ordered a few drinks afterward. I’m not a drinker so one glass of Weng Weng already knocked me down. 😀

Before heading to bed that evening, we inquired about Rovic’s tour packages. There are four tour packages. Since we only have three days in El Nido, we were only able to try one package. Boohoo. We will definitely be back to try the others! We asked the receptionist which one he’d recommend and he said Package A. Package A it is, then.

Package A costs P1,200 per pax. This includes island hopping (covering five islands) and lunch. Be sure to bring money because in one of your stops, you might want to rent a kayak. Also, it’s best to bring a water-proof camera because all your stops will require you to swim/paddle to shore. We weren’t able to take lots of photos because we only had my SLR with me. So as not to damage it, we decided to just leave it with our boatman.

We still managed to take a couple of shots though (all thanks to our boatman): I hate that this trip had to be planned just a few days in advance. I didn’t get to go on a diet. LOL!

We reached El Nido town at around 4 in the afternoon. We were dead tired because of all the swimming and kayaking fun. We remembered that our boatman mentioned that we can rent motorbikes from the locals if we wanted to see the whole town for ourselves. He also told us about where to capture the best sunset in El Nido is–Las Casas.

Instead of taking a nap, we looked for a motorbike rental. Unfortunately, most of the bikes were either under repair or have been rented out already. 🙁 And so we resorted to just taking a tricycle ride to Las Casas instead. Since sunset was still an hour away, we walked by the shore and just enjoyed the fresh air. We don’t get that a lot even in Rizal. The picturesque view of the sea and mountains blending with the calming sound of the waves took my breath away. Arjay and I even began thinking of moving to El Nido because this is the type of life we are craving for: laid back, quiet, and with the sand and sea right at our doorstep. We went as far as talking about how we will homeschool the minis there and what our house will be like.

We haven’t moved to El Nido, but it’s on our minds…

True enough, Las Casas does give you a spectacular view of the El Nido sunset. The golden rays of the sun reflected on the waves with the orange and blue sky in the background looked all so beautiful. That was one wonderful vacation cap for our last night! As much as we wanted to stay longer, we had to travel back to Puerto Princesa on the third day to catch our evening flight back to Manila. Since we had a few hours before the flight when we arrived in Puerto Princesa, our friend took us on a quick city tour where we saw the old colonial structures as well as the new government buildings. We didn’t forget to drop by Baker’s Hill, too, to buy the famous hopia for the minis.

Before our flight, we had late lunch at Kinabuch’s Bar & Grill where we had the recommended Kanin ni 04 and garlic butter shrimp. We met Buch Chase himself there as well–nice guy! They say a must-try at Kinabuch’s are the crocodile dishes, but I’m not an adventurer when it comes to food so I played safe with the shrimp.

After lunch, we parted ways with our friend and we headed to the airport. Since we were still quite early, we decided to get a massage at the Vibe’s Massage booth inside the departure area. With us in the booth is Edgar Allan Guzman who Arjay greeted as if they were friends. “Oh, nandito ka rin ‘pre?” he asked. E.A. was friendly enough to reply, “Oo eh. Pero mabilis lang.” Then we all had a massage together. Hahaha! I swear, my husband should be given the Mr. Congeniality Award. He befriends everyone…even celebrities who don’t know who he is.

And that ends our El Nido Palawan vacation.

If you’re heading to El Nido, here are a few tips:

That vacation made us crave for more. Any suggestions for our next holiday?

Get PhP500 off on your next Palawan trip!
Use the coupon code momondutyC017 when booking with LetsPalawan.com.

4 Tips to Prep for Summer and Semestral School Breaks