I just came home from the kids’ check up. The two little ones have had a cold (and some coughing) for a week so Daddy A and I decided to bring them to their pediatrician. With two sick babies, I expected to have a very an extremely difficult day. Fortunately for this Momma, the kids decided to just sleep it off.

The Little Man was the first to fall asleep. He was super fussy since last night until earlier today. But, this afternoon, he gave Mommy a break and just slept after feeding. 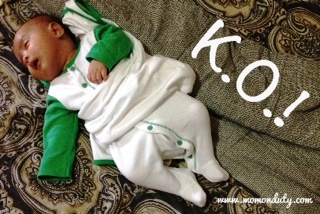 After putting him to sleep, I went on to my hyperactive little girl. I have been having a hard time getting The Princess to take a nap recently. She just wants to play, dance, sing, whatever activity she can think of! Since she doesn’t like being forced to nap, I just usually let her do her thing and hope she won’t be overtired.

She drew on her new notebook using her new crayons then she asked me to watch some cartoons with her. A few minutes later, she stopped laughing and moving around. She finally went to sleep! 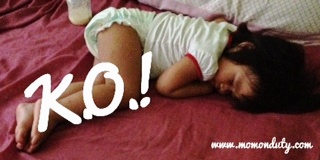 Thank goodness the kids didn’t give me a hard time today. I’m feeling a bit under the weather as well; I don’t think I can handle two cranky kids!