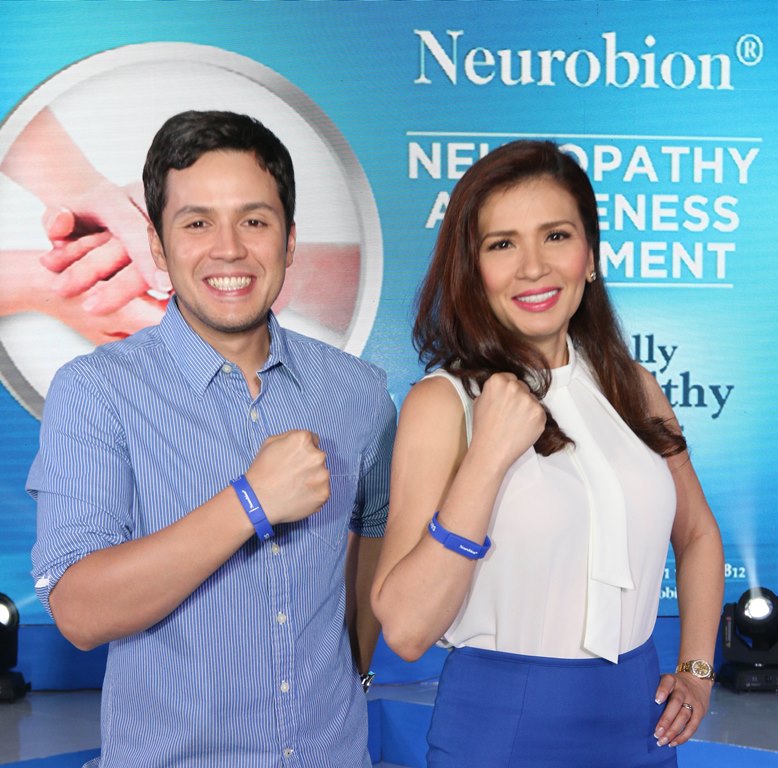 (MANILA, Philippines) – Neurobion®, the World’s number 1 B-Vitamins according to IMS Health, partners with actress, singer and mother ZsaZsa Padilla and international director and producer Paul Soriano to raise awareness on Neuropathy or nerve damage. The two brand ambassadors will help reach a wider audience for the advocacy campaign and influence Filipinos to take care of their nerves early to prevent serious nerve damage in the future.

Neuropathy: Don’t Let Nerve Damage Get on Your Nerves

In this day and age, many people’s lifestyles––considering the activerole computers, mobile phones and tablets play—have never been busier, and in turn, nerves undergo stress day in and day out.

Having a hustle and bustle kind of lifestyle can take a toll on the nerves when neglected, and without healthy nerves, even the most seemingly normal daily activities will become difficult to do.

Symptoms of Neuropathy include numbness, tingling and sharp pain in the hands and feet, burning sensations, and muscle weakness.

“Because the symptoms of Neuropathy are all too common, people tend to brush them off lightly or misdiagnosed them,” explained Dr. Chrysanthus Herrera, Merck Inc. Philippines Medical Science Manager.“However, what we don’t know is that a lot of people are already suffering from Neuropathy and their health cases remain unreported or undiagnosed.”

Nerve Damage: No One is Safe

For Padilla and Soriano, it takes a lot of nerves––literally!––to make it through a day in their busy lives. Both have jam-packed schedules with countless appointments and meetings with different people from the industry. Their respective crafts often require them to work longer hours and stay up late at night to do what they do best.And similar to any other person, they also need to make time for their loved ones.

It’s a good thing ZsaZsa and Paul are able to balance career and family and livefully with proper diet, exercise, and a daily intake of optimum balanced B-Vitamins to keep their nerves nourished.

In 2014, Neurobion® launched a nationwide campaign called Neuropathy Awareness Movement to make more information on nerve damage available to Filipinos. This year, the advocacy remains but the reach and depth of the campaign will be bigger to encourage more Filipinos to be proactive in early detection and prevention of Neuropathy.

“Neuropathy is a serious condition that needs to be addressed. Contrary to popular belief, even young people can be prone and be exposed to this condition, not just old people. We took this advocacy because we want to empower Filipinos with information about the importance of nerve health. It’s time that people give the same level of care to their nerves as they do for the rest of their body,” said Neurobion® Brand Manager Eloisa DyBuncio.

Neurobion®is trusted by doctors for over 40 years.With its optimum balanced formula of Vitamins B1, B6 and B12,Neurobion® is clinically proven to nourish and regenerate the nerves.

As part of the Neuropathy Awareness Movement, information on nerve health will be released in print and digital outlets. In addition, consumers can avail of free nerve screenings in select clinics and hospitals.

For more information on Neurobion® and the Neuropathy Awareness Movement, visit www.facebook.com/NeurobionPhilippines

Merck is a global pharmaceutical and chemical company, a history that began in 1668, and a future shaped by more than 40,000 employees in 67 countries. Its success is characterized by innovations from entrepreneurial employees. Merck’s operating activities come under the umbrella of Merck KGaA, in which the Merck family holds an approximately 70% interest and shareholders own the remaining approximately 30%. In 1917 the U.S. subsidiary Merck & Co. was expropriated and has been an independent company ever since.

5 Ways to Support Your Child’s Development