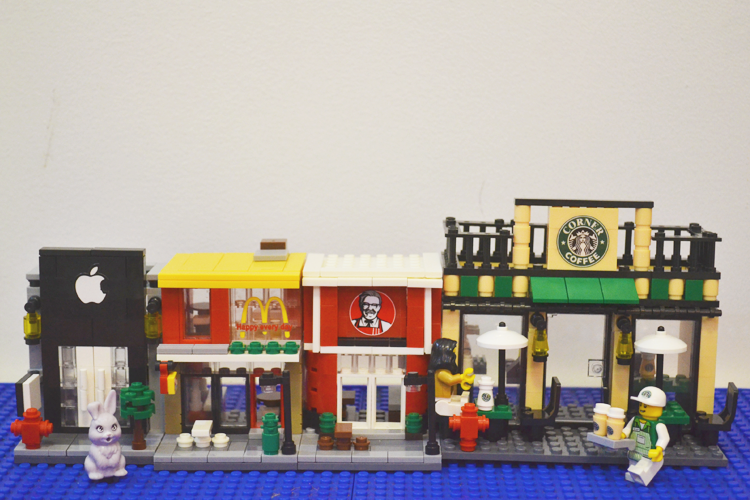 Every Christmas and on his birthday, there is only one thing that our little man asks for — BLOCKS. Wooden blocks, LEGO blocks, all sorts of blocks! He doesn’t have other toys because he simply doesn’t like playing with anything else but blocks. He just wants to build, build, build! Last Christmas, we bought him a new set of LEGO blocks, which he absolutely loves. However, while Arjay was doing his weekly market duties, he passed by a bazaar that sells tiny block collections that you can turn into a town. The HSANHE Mini Street collection is a Chinese brand of tiny blocks that you build into stores. It just sells starting at Php 315 so it’s not too heavy on the budget and won’t hurt too much should your little one lose pieces. (Arjay gets super stressed when our Caleb loses his LEGO pieces! LOL)

We already have three shops: McDonald’s, KFC, and a coffee shop. This week, we bought another one – the Apple Store. Here’s a quick demo video of how we built the store…

» You can buy your own Mini Street Apple Store here. «

The HSANHE Mini Street Collection is great for kids 7 years old and up. While my 4-year old enjoys playing with the already-built stores that his dad makes, he still can’t follow the instructions to build the actual store himself. I mean, we can leave him to build the store (great for practicing fine motor skills!), but he’ll most likely build something with his own design. Older kids, on the other hand, will be able to follow the instructions provided in the kit and should be able to build it themselves.

The blocks are LEGO compatible too, so you can mix ’em with your LEGO blocks – although we prefer not to (OC issue). If you have a LEGO mat, the HSANHE blocks can fit there so you can use your mat while building your stores to keep them in place.

While LEGO blocks are great toys, I find them quite expensive especially for little kids who will most likely lose the pieces. I have a 4-year old LEGO lover and we’ve lost so many pieces already. It hurts, especially when you think about how much those blocks cost! The HSANHE Mini Street Collection only retails starting at Php 315. That’s not bad considering that the quality is pretty good and it’s as entertaining as building with LEGO blocks.

The only difference, we think, is that the colors of LEGO blocks are more vibrant that those of HSANHE’s. Again, the kids don’t mind so it’s not a huge issue for us.

With the price and hours of fun-tertainment it provides the minis (and ourselves!), the HSANHE Mini Street collection is a recommended toy not just for kids, but for the whole family. We love that we can build the stores together then play with them afterwards. We look forward to building more stores so we can have a whole town to play with!

If safety is your concern… The blocks are safe for kids, but parents must watch while the kids are playing to prevent choking because all of the pieces are so small.