Yesterday, I woke up with Kelly tucked under my arms. I felt her forehead and knew right then that there was something wrong. I took her temperature — she had a fever. Later that day, she started coughing and I noticed that she has a runny nose too. She has the flu.

What is the flu?

The flu is caused by a virus called influenza. The symptoms are very similar to the colds and other viral illnesses, making it a bit difficult to tell if your toddler really has it. So, how do you know?

When your child has the flu, expect him/her to be irritable. He/She may also have low appetite and a sore throat. Some children also experience abdominal pain, diarrhea and vomiting.

How to care for a toddler with the flu 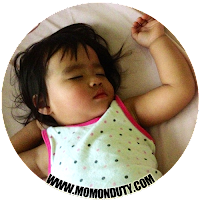 Being a mom for a year can teach you a lot about caring for a sick child. Aside from lots of hugs and kisses, you can help your child out by giving him/her plenty of fluids and lots of rest.

Other things I used/gave/fed Kelly that alleviated the flu symptoms are:

Your little one should start feeling better after three to five days. The first thing that will go away is his/her fever. You will later on notice his/her appetite coming back. The cough/cold may stay for a week, but it should not last more than week.

If your child has a fever over 39.4 degrees Celsius or a fever that lasts more than three days, call your doctor! You should also bring him/her to the doctor if the cough lingers for more than a week or if he/she gets sick soon after recovering from the flu.

BUSTED: Top 5 Myths About Freelancing in the Philippines

Ask Mom On Duty: “What are the steps to registering as a freelancer in the Philippines?”

Photobook: Capturing Your Most Treasured Moments