When I was a kid, my parents didn’t take me to trick-or-treat events. They’re not fans of events like that probably because they feel it’s a hassle (and expensive) to prepare for Halloween. Moreover, I don’t think there were lots of trick-or-treat events before. But, since we want Kelly to have a fun and memorable childhood and since many venues now offer this event for kids, we decided to look for Halloween events that we can bring Kelly to. Unfortunately, we were too late. All of the slots were already taken.

I was going to give up already when I saw Louise of Mommy Practicality‘s tweet. She had extra tickets for Fun Ranch’s Boo! Time event and offered it to those who’d like to attend. I quickly sent a message to her and she gladly gave one slot for Kelly.

We initially wanted to dress Kelly up as Tinkerbell or one of the Disney Princesses. However, none of the princess/fairy costumes fit her – she was too little. So, we settled with a ghost costume. I was against it at first because I really wanted a princess costume for our unica hija, but Daddy A insisted. 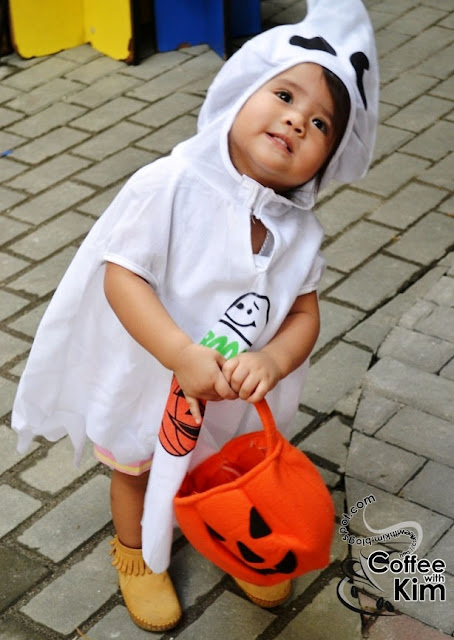 Registration for the event began at 3 in the afternoon. I was actually waiting for someone to gather the kids and make them line up so they can go to the participating shops in a more organized manner. However, after registration, we were just given a piece of paper with the list of participants and were left to go around on our own. It was a bit confusing, but Kelly had lots of fun.

After visiting all the shops, we brought the little girl to Faber Castell’s station where coloring materials were prepared for kids. Kelly loved this part of the event since she really enjoys coloring. 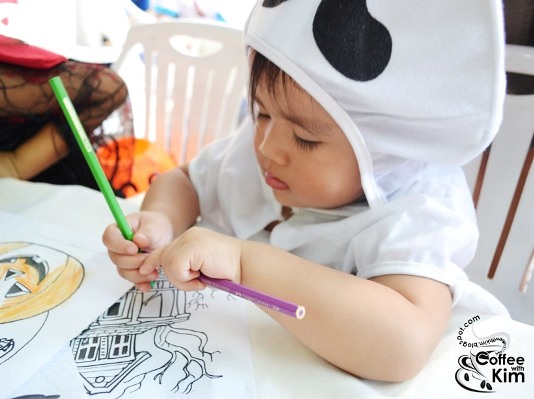 When she finished her art works, we bought a ride-all-you-can pass for her so she can try out the rides at Fun Ranch. She rode the ferris wheel, tried the bump cars, went horseback riding on the merry-go-round, traveled around on a train and drove her ship in the space ride. She asked for a second round in the bump cars, but she was so tired that she fell asleep during the ride.

All in all, Boo! Time 2012 was a fun-tastic event. I’m glad we spent Kelly’s first trick or treat experience there!

A Flower In Bloom

The Princess at 7 months!