Skip to content
This month has been very good to us. Many goals have been reached and many prayers have been answered. But to kick things off- let me begin with the best blessing this month…
KELLY IS 11 MONTHS OLD!
My little girl is just one month away from her first year. How fast time flies! We have started preparing for her birthday already (which will be held in a Beach Pavilion in Club Manila East). We initially planned it to be a fantasy-themed party, but since we changed the location, it’s going to be a luau party. I’m thinking grass skirts, a hula dancing competition, and ice cold tropical drinks! 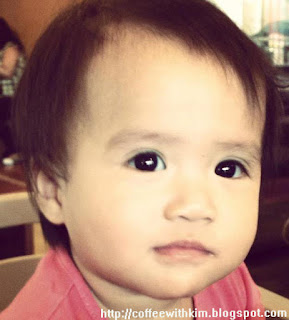 Anyway. We usually celebrate Kelly’s monthsaries by having lunch or dinner in a nice family restaurant in Eastwood or Venice Piazza so we can bring her to Gymboree or Venice Piazza’s playground after the meal. But today, we celebrated her monthsary in SM Calamba. Which brings me to the next blessing we received this April…
Arjay used to be assigned in Makati as a sub-station commander. But, when I gave birth to Kelly, we both agreed that it would be better if he transferred to a station that is nearer to our home in Cainta. The transfer was a long and expensive process. After being relieved from Makati, he was re-assigned to the Regional Headquarters in Laguna. I said expensive because he had to drive from Cainta to Laguna almost every day just to go to work. Think of how much we had to spend for the toll and gas! We had to endure this for three long months.
A few days ago, though, Arjay came home with a smile on his face and a piece of paper in his hand. He has been re-assigned as the Deputy Fire Marshal of Cainta! Yey! This is something we have been waiting for. Not only will this be financially helpful for us (his work is now just ten minutes away from home- less gas consumption, no toll, and he can go home to have lunch with us), but this is also a good thing for his career.
This is why we spent this day in Laguna. We accompanied Arjay to the regional headquarters to get the necessary documents for his courtesy call. Kelly didn’t mind spending her 11th month there, though. She enjoyed watching trainees march around Camp Vicente Lim.
And for the last blessing. Remember my post Project Fit and Toned? I already started choosing what I eat. But, when I had my measurement taken last Tuesday by Coach Xhi and Rissa of PinayFitness, I learned that my body fat percentage is really high. I may not look like it, but I am on my way to obesity. The opportunity to have someone guide me in my venture to a healthier me is a huge blessing; add to that the support I am receiving from my family and fellow bloggers.
The universe really responds as long as you keep saying yes to it. So cheers to an awesome April!

Journey Into The Unknown By Taking A Law Degree

My Battle Against Stretch Marks with Palmer’s Massage Cream

Home Birth in the Philippines and the No Home Birth Policy